History of the Land 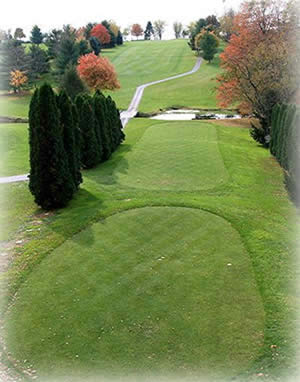 The name Moccasin Run is derived from the Indians that dwelt along the Octorara Creek.  According to The Atlas of Chester County PA, Early Indians, Trails, and Villages, it locates the Shawnee Indians in West Fallowfield Area, which is 1 mile west of the golf course along the Octorara Creek.  the Nanticoke Trail was the now Route 10 (Octorara Trail) which is the water shed divide between the Delaware & Chesapeake River.  We are situated 3 miles north from the intersection Route 41 and Route 10 (Octorara Trail) that the Nanticoke Indians used in the early 1700's

The property Moccasin Run sits on was once the land of a George Glenn and is named such on the atlas of 1883 Breou Farm atlas map for West Fallowfield. George Glenn also shows up on the 1873 Witmer Farm Atlas map for West Fallowfield. The 1883 map shows a frame barn and a stone house at the end of a short drive off Schoff Road. The original stone house is still on the Moccasin Run property (and has been converted into an event venue). The frame barn was taken down and some of the original barn wood was saved and used in the present day Pro Shop which was built on the North block wall of another barn on the property that was used as a calf shed.

On both of these maps there is a stream going through the property which today is still in existence and comes into play on holes 5,8,11,14,15,16,17,18.  This creek which flows thru Moccasin Run is a tributary (not officially named) to Wolfe's Run Creek which flows into the Octorara creek where the Shawnee Indians settled in the West Fallowfield area.

A Poem of Moccasin Run

Streams of Knight Run and Wolf Hollow flowed
Octorara Indians of sixteen hundred have roamed
The Octorara Area had productive agriculture land
Farms were available for families to raise their clan.

Paul, Dorothy and sons in 1986, a new idea was bought
This farm "a golf course" was not a welcome thought
Opposition was building, a challenge to win
Politicians and neighbors watching construction begin.

It was zoning and finances construction would freeze
Leasing and renting equipment our sons operate with a breeze
Newspaper articles were printed, a farmers mistake
Many visitors with cameras wondering if it was all fate.

A name for the golf course, it had to be good
An Indian symbol, I wonder if I could
Moccasin Run was suggested and agreed by all
A logo for Moccasin Run, who should we call.

I visited our neighbor Sue, Moccasin Run is the name
Sue designed the logo; she said it was no pain
The back page of Wilson Sports showed our logo that year
It was voted in top ten as "Logo of the Year".

Moccasin Run will serve many golfers
Dignity and honesty, King Family desires par
Paul, Dorothy and sons have gone through many curves
Asking God to bless the golfers we serve.